My Continuing Journey into Cutting Back on My Paper Usage

I'm not going to lie here. I've used a lot of paper in my lifetime. I'm a visual/tactile learner, and as an author, that has proven to be a hindrance to saving paper.. Limited to the computer, I can easily miss mistakes, so I need that hard copy to edit from. I finally managed to cut back on the number of drafts I needed to print out (one for my own edits, one for the initial editor's edit that was sent to me and one for the final proof when I had to check for typesetter's errors), but that was still a lot of pages and a lot of paper. These days when I'm reediting/republishing my older books, I limit myself to one printout. And, as noted in prior posts, I try to reuse that paper to make note paper (cut a bunch of sheets in fours and scribble on the back). We have these scruffy little notepads scattered throughout the house.

I read mostly (not all, by any means) ebooks, so that saves a few trees (I hope). 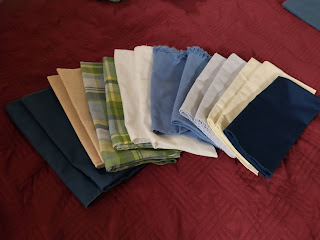 But in the house, I was still using a lot of paper napkins and paper towels. Recently, COVID shortages and my own conscience convinced me that it was time to try to cut back on that kind of usage. I opened up the chest where I keep my tablecloths (not sure why I have so many since I only use them when we have big gatherings) and found a ton of cloth napkins I had accumulated over the years. I probably don't use more than a dozen at a pop and not more than two or three times a year. It seemed foolish to just keep storing them and buying paper napkins. So, I dug them all out and we are now using cloth napkins all the time (except for those days when I'm serving something that is really difficult to wash out of cloth, in which case I  usually peel off a couple of paper towels and use those). We use them more than once. With refolding, one napkin can be used for several meals unless those meals are really messy. I keep a dishpan of soapy water in my laundry tubs and toss the used ones in there until I have enough to combine with some other items to make up a load of laundry.

As for the paper towels, I'm in the process of cutting back on my use of those, too. There's apparently an entire movement I never even noticed (the unpaper towel movement). People make (or buy) cloth wipes that are usually made of flannel or bird's eye cotton and store them in various ways, either rolling them up on a tube or a paper towel holder or folding them and keeping them in a small box or a basket on the counter. I originally thought I would just cut up some old towels, double zigzag the edges, and that would do the trick. I did this, and they turned out all right (easy and I was able to use up some old odd colors of thread I didn't have a use for anymore). They're not even remotely pretty, but they might eventually work. Unfortunately, I didn't zigzag close enough to the edge, so there was a lot of fraying, and after washing, a lot of loose strings. We'll see if that fraying/shedding eventually becomes less prevalent. 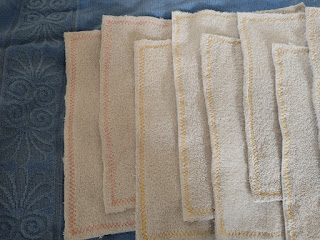 If I had more washcloths lying about, I would simply use those, but I don't. I could have bought a yard of flannel and zigzagged the edges (what many people do), but after my towel experiment, I wanted a break from sewing. I did order a few bird's eye cotton unpaper towels (seconds, to save money) from Etsy, and there are a lot of choices on there if one wants to purchase cloth substitutes for paper towels. Here are some examples. 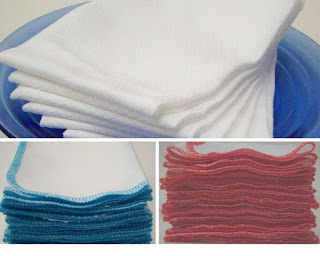 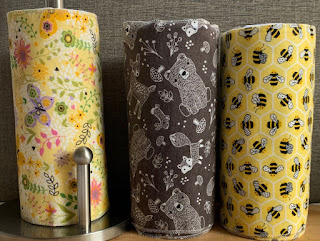 Available at Etsy
My next step is to find/make a small box to store the paper towel substitutes in (the napkins fit into a kitchen cabinet, but they took up the last of my cabinet/drawer space, so no room for my paper towel substitutes). I'm sure I'll still use paper towels for some things (soaking up extra cooking oil, for example), but I hope to significantly cut back on my use of them.
Who knows? If I get really inspired, I might start using cloth handkerchiefs again.
We've all (unfortunately) had to make negative changes in our lives because of the virus, but this is perhaps one positive step that this year's quarantine has inspired me to take. I hope I can continue moving in this direction and live a bit more cheaply and a bit more green.
Update: While trying to find more drawer space, I began cleaning out the drawer where I keep my dishcloths/hand towels/pot holder-trivets and discovered that I had half a dozen old, worn and somewhat stained dish cloths I haven't used in forever, so I'm adding them to my stash of unpaper towels.
11/21- My paperless towels arrived. They're so pretty in their wrapping that I almost don't want to mess them up by taking them out and using them. But I will. 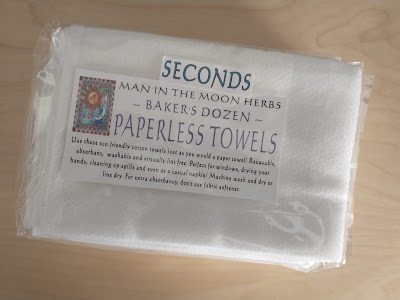 From Man in the Moon Herbs on Etsy
Best wishes on your own positive life changes! Have a wonderful day!