So...a couple of weeks ago, I republished two of my books. That always takes a lot of time and effort, and when it's done, I just veg out for a bit before I jump back into writing (or most writing-related activities).

Because of that, I've had some time to check out some intriguing videos.

This one came my way via a family member. Not fond of the distraction of the music playing in the background, but I found the concept interesting. In another (longer) video, the poster who had lived in several other places in the world, stated that there is no garbage day in Amsterdam. They simply have all these underground receptacles. Some of them have lights to show they're full, some have trash compacters. But you just drop your garbage in these receptacles that are located here and there and then you don't have to worry about putting your garbage out on the correct day of the week. It also solves the problem of having a lot of individual cans sitting around in a city with a limited amount of space..

On a completely different note, I was clicking around the internet the other day and discovered that during this time of trying not to get out and interact with  people too much, some people (especially those who live in apartments without laundry facilities) are getting inventive about ways to avoid going to the laundromat too often. While there are such things as portable washers, they look a bit bulky (to me, anyway) and often have electrical components. Instead, at least for lighter articles (underwear is usually mentioned), they're using a salad spinner.

I've also seen this touted as a good way to wash the masks we're all wearing. And there have been people hand washing sweaters and then using a large salad spinner to get a lot of the excess water out before laying them out to dry. It's an interesting repurposing of an object that might simply be collecting dust on some people's shelves.
And finally, you may have seen this information on the news or on the internet during the past week, but I found it interesting, so I'm posting it here. In Finland, at the Helsinki airport, they're using dogs to sniff out COVID. 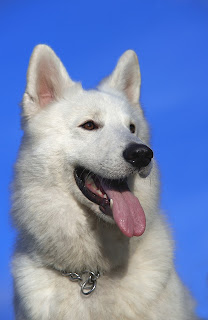 The program is still in the testing phase (I think), and I'm sure it has many limitations, but it's an interesting and innovative way to deal with a difficult situation.
So those are just some of the items that have made their way into my newsfeed lately.  I hope you have some interesting things to keep you engaged during these difficult times.
Have a great day!

Email ThisBlogThis!Share to TwitterShare to FacebookShare to Pinterest
Labels: appliances, COVID, DIY, do it yourself, dogs, green living, laundry, repurposing