About eight years ago (wow, time has flown!), as part of a post titled "Libraries are Awesome!", I posted this video by the fictional Norwegian boy band, Boyzvoice.

That's just a clip (I think it's from a mockumentary the group made), but if you want to hear the entire song, here's a link. (I love the lyrics where, to show how much he loves his library girl, he reads a thousand books about a girl called Nancy Drew).

Then, recently, I heard a song called "The Librarian" by Honor Finnegan. It was the second time I'd heard it, and given my weakness for books, libraries and love songs, it caught my attention (and reminded me of the "Library Girl" song above).

So, I set out on a search for more songs about libraries and librarians. There are more than I would have imagined. Some are by librarians, singing about the library's services. (Note: I had another song here, but it disappeared, so my apologies for the dearth of actual songs in this post).

Of course, a love of libraries (and books) is a great thing. Who wouldn't love to visit these libraries? 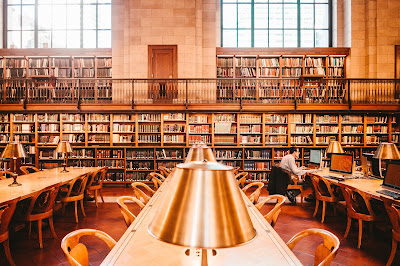 There were some songs that had library in the title, but didn't seem to be about libraries or librarians (or maybe just one incidental line), and there were a number meant for children. Which is cool, just not what I was looking for.

There were songs by apparent amateurs. One young man (no doubt six years older now) wrong his own love song (he calls it a joke song) called "The Librarian Song." Or "I'm in Love with a Librarian" by Beatnik.

Amazingly enough (to me, anyway), there were a number of songs by name artists. Tom Chapin sang "Library Song." Jimmy Buffett had a song called Love in the Library. "Marian the Librarian" is from the musical The Music Man.

And, of course, "Librarian" by My Morning Jacket.

I could go on, but these were some of the most interesting. If you've run across other songs about libraries or librarians, feel free to chime in.