To Cookbook or Not to Cookbook

I'll admit that I'm not much of a cook. I don't like spending more time making something than I do eating it, and I always assume (rightly so) that if I start baking, I'll start eating the things I've baked (I think we all know what that would mean).

But I do happen to love reading recipes, and I like to mix things up a bit and get out of my usual cooking routines now and then. So, I used to have a number of cookbooks. For the past few years, though, that hasn't been the case. I own 3 professionally published cookbooks, along with two little cooking booklets my sons contributed to when they were in kindergarten. Of those five publications, three are sentimental (one of the professional versions was given to me as a gift by a friend I haven't seen in years. To its credit, it does have a solid pot roast recipe). As for the other two books, I'm not sure why I have them. One is a book on vegetarian cooking (I'm not a vegetarian, but I like vegetables) and the other is a slow cooker book, and I haven't gone near mine in years. 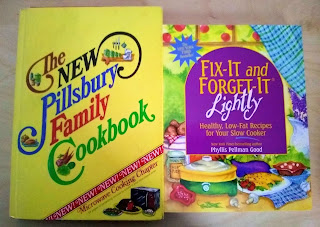 Today when I need or want a recipe, I either go to a folder where I keep some tried and true recipes along with a few I've decided to try out, or I just hop on the internet, type in what I'm looking for and then cruise around until I've found something that suits my available ingredients, complexity and time constraints. I rarely tear recipes out of magazines anymore, although I have some older recipes I originally came by via newspapers and magazines. I just found that my "to be tried" stash kept growing until it was all but unmanageable, and I hoarded those magazine clippings for fear I would never find them again. That rarely happens with the internet. Once you've found it, you can probably find it again (although I do print the ones I want to try right away).

That said, here are some of my favorite places to find recipes (lately, at any rate. That could change at any time).

The old dependable All Recipes.

Cookies and Kate if I have vegetarian guests or I"m just looking for a good vegetable recipe.


Here's one of their videos:


There's also the Tasty website (more conventional than the videos, and all the recipes are written down).

There are others, but these are a good start.

How about you? Do you still use cookbooks, have old favorites, pore through magazines, cruise the internet or a combination of those?

I have binders (yes, plural) with recipes typed up, one per page (some with pictures). (I haven't gotten around to scanning the pics but instead have them cut out and double-taped to the page so I can remove them for future copies, if necessary). When I take a potluck item, I also take a copy of that page so that party-goers can see the ingredients; I also take extras because they quite often want a copy to take home too.
Each recipe is typed in the same format, including where I got the recipe, who gave it to me (AllRecipes.com is one of them), and it's ranking out of 10. If I think it is a 9/10 or higher, I keep it; otherwise, the recipe is out of here.
I title the recipes, for example: Meat-GroundBeef-Lasagna-Often. I also include Rarely and Untried. I used to have everything in one big binder, but it was cumbersome. Now I have a small one for Often (since I refer to those more often), and I split the Rarely/Untried ones into two small binders (I try to look through them several times a year). In the backs of each section (like Meat-GroundBeef) are plastic sleeves where I keep even MORE Untried recipes (that I just haven't gotten around to trying or typing up yet), often from magazines, newspapers, and the Internet).
In an ideal world, I would have ALL those recipes typed up (it's on my to-do list but time is running out for THAT to happen). I also have a typed list I call Temperatures: I list every recipe by their temperature, starting at 325F and working up to 425F, so that if I have one thing in the oven, then I can prepare something else to go in with it at the same time. I do this most often with desserts or rolls.
By keeping everything in a Word file, I am able to use the Find/Search feature to locate recipes when I want to get rid of certain ingredients from the fridge. It is also easy to share my recipes with others. My daughter has a copy of my "book" and refers to it often. She also puts HER extra recipes in there too (but doesn't update the Table of Contents nor the Temperature pages).

I've always considered myself an organized person (I have multiple expanding folders of user manuals/warranty info of products/appliances we own as well as a drawer of maps organized alphabetically and a folder with receipts outlining every repair/renovation we've done on the house over 30+ years). But you have me beat by far!

I love the idea of organizing recipes by temperature. I can't tell you how often I've been in the bind of trying to juggle dishes in the oven when people are coming over.

I also love your method of bringing recipes to potlucks. One year when I was hosting the Illini4000 (bicyclists riding for charity), I taped an ingredient list to each dish, because some of them had dietary restrictions, but I've never done it otherwise. What a great idea!

I consider YOU one of the most organized people *I* *know*, Myrna!
I too keep user manuals/warranty info of products/appliances. Mine are in sheet protectors in four huge zippered binders filed by date purchased. (I also keep former manuals in case correct manual doesn't include certain maintenance information.)
I don't have a drawer of maps, I'm afraid, LOL. We have a giant North American "atlas", and I write in it where we have travelled (in pencil), also noting on a post-it note of where we DON'T want to travel in the future (as we had a really bad experience at certain motels in a certain city recently, and no way are we returning). I will move my post-it note to future maps....
I have my receipts for household repairs, etc. kept with my self-employment income taxes for the required ten years, then I review each and every one to decide whether to keep them longer or not; if I keep them, they are usually plopped in the sheet protectors with the original paperwork.
Can relate to your juggling dishes when people come over. We OFTEN have company. Thankfully, I believe that SOME recipes don't have to be put in at exact temperatures, so I have a little leeway (roasts, even buns put on a bottom rack for a higher temperature - and really watched/flipped in a timely fashion).
Some recipes aren't accurate. They are a basis, but I switch it up. Like Caesar salads. I prefer chopping up (lots of) pieces of mozzarella cheese to toss in, plus I prefer REAL bacon (as opposed to bacon bits) that I have cooked in the microwave ahead of time. I use up whatever lettuce I have on hand (radicchio, romaine, iceberg) and sometimes set chopped radishes and croutons aside for people to add themselves. No measurements are taken.
By the way, bacon was the bane of my existence for decades - until I started chopping a package up in 1-1.5" pieces (after removing long sections of fat first), rinsing the plate's contents with running water (so the bacon doesn't shrink as much), cooking for 10 minutes in my microwave with a dollar-store cover over it (my MW is 33+ years old so 700 watts), rinsing with cold water into a strainer, using my hands to break up the now-colder pieces again, plopping back onto the plate, and cooking another 5-10 minutes in the microwave. After all that, I place the bacon into a Rubbermaid glass container and put in my fridge's freezer, where it is available any time I want immediate bacon for my salads, pizza, omelets, etc. I just take it out of the freezer and nuke on a plate in the microwave (with that plastic cover) for 2 minutes, and, voila, I haven't had bacon sizzling/burning me, it hasn't shrunk much, and it's instantly available. Lasts months and months in the freezer (as I cook up 4 packages at a time for freezing).
Hope this helps....

I love the bacon idea! I don't have a lot of freezer space, but I'm sure I could fit this in.