It's super crazy and scary here in the U.S. lately (I seriously do not recognize my country these days), and I've been reading a lot in order to remain calm and cheerful. Some of it is rereading, and some of it is new.

The new is Jodi Taylor's The Chronicles of St. Mary's series. The books are set in England and involve a group of historians who work for a university and travel in time to different historic sites in order to observe and chronicle historic events. There's a central cast of characters flowing through the books. Friendships are formed, disasters take place (regularly), there's always the danger of getting stuck in the wrong time with no way to get home or of making a mistake and changing the course of history, and there's also a love story (but that's not the main focus, and often it isn't featured at all). Currently there are 8 books (9, but the 9th is just short stories, most of which have been published as singles), but I'm sure there are more to come. Here's the first:


I've mentioned these books before, but I'm also rereading Graeme Simsion's Don Tillman books, The Rosie Project and The Rosie Effect. Don is a genius scientist and professor who is also incredibly socially awkward (there are hints that he is on the autism spectrum, but that's never nailed down). He's endearing and smart and funny and totally devoted to his friends, even when he is driving them crazy by his inability to "act normal." These are fun and heartwarming books, and I fell in love with Don Tillman. 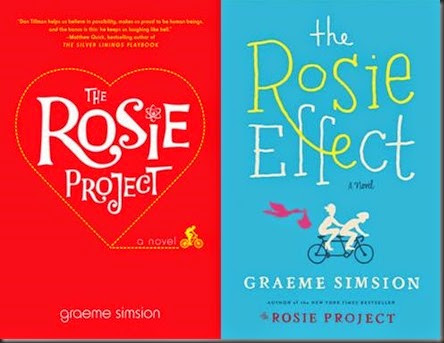 On my to-read list are numerous books, including some non-fiction (The Demon-Haunted World: Science as a Candle in the Dark, a 1997 book by Carl Sagan).


So, that's a thumbnail view of what I've been reading. What's on your reading list?

OMG, Myrna. I just read a book that made me laugh so hard that my throat got sore, I had a hard time catching my breath, AND the tears obstructed my sight so much that I couldn't read for a long time afterward (several times). I am sooooo going to re-read this book, as I couldn't get enough of it. It's Day Leclaire's Jinxed (with my copy published in 1990, but Amazon shows a republication in 2006 too). The heroine makes/repairs new toys/patents, and hilarity ensues while testing all the missiles, etc.

As for the news, I get SOOOO frustrated when I hear of yet another tweet - and *I* live in Canada! My husband is glued to CNN these days. All it does is raise my blood pressure, so I steer clear. Reading books like noted above definitely helps my blood pressure go in the right direction....

I have finished reading all my 2015-2017 print books and am now working on the oldies. I have hundreds of them and am actually making strides. I also have numerous eBooks to read on my computer, including a free bunch from Harlequin Blogs that I have wanted to read for years....

Oh, I love Day! I don't know her personally, but I've had some contact via writer's groups, and she's a sweetheart. And I have some of her books, too, but not this one! I'll have to look it up.

As for the news, oh yes, thank goodness for books. I think I would have run screaming into the night without reading to calm me down. Have fun reading the oldies!