Are You a Scarf Person?

I'm not talking about winter scarves designed to keep the snow and wind and ice away. I've always had those out of sheer necessity. No, I mean the kind that one drapes artfully around the neck and/or shoulders, fashion scarves that serve no purpose other than to draw the eye and enhance whatever outfit is being worn.

I've always wanted to be a scarf person. When I was young, scarves were everywhere, worn on the head. I grew up in a suburb of Chicago where babushkas were everywhere (but I suspect that people across the country wore them, too during that era). They made sense. They kept the rain off your head, hid a multitude of bad hair day sins and covered up the hair rollers that we all wore back then. Today, head scarves of that ilk are a thing of the past (I rather miss them), and scarves are worn more for decoration than for practical reasons. People who wear them look so together, so polished. Unfortunately, I don't have the knack and I mostly live in sweatshirts, tees and jeans where a fashionable scarf would be out of place even if I knew what I was doing. So, I look at all the pretty choices and sometimes wish I were a bit more fashionable. Here's an example from Ann Taylor's current collection. That model definitely knows how to carry off the fashion scarf look! If I tried that, I would take one look in the mirror and say, "I don't think so." Perhaps some of us just aren't meant for the world of scarves.

On the other hand, if I found the right scarf technique, I suppose there might be hope, even for someone like me. Here's a video (from five years ago) demonstrating 25 ways to wear a scarf. It has close to 37 million views, so my sincere apologies if you've already seen it.

Of course, if you have too many or are just not into scarves, you could use the ones you have for a curtain/room divider. 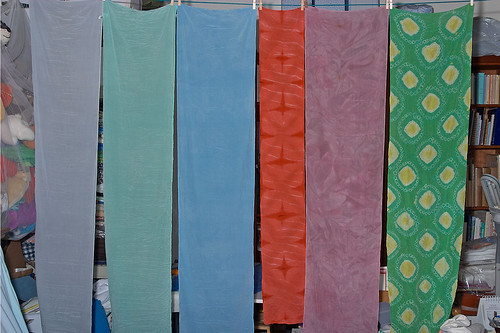 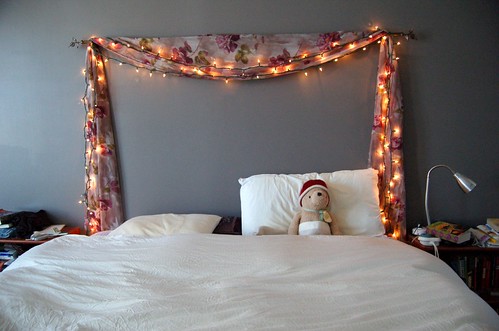 
Or stitch them into a panel (again, for a curtain effect), stitch a backing on part of one to make a pillow, tie the ends and drape the scarf into a simple bag, or wear one as a belt. Drape a scarf over a small table to dress things up.

How about you? Do you wear scarves or, if not, do you have any good ideas on how to repurpose them?

I always feel like I'm choking when I wear a scarf. I have received them as gifts over the years but pass them along to my daughter who loves to wear them.

I would be worried about a fire with the lights draped over the scarf.

Good point about the lights. I remember when decorating articles would recommend that people drape a scarf over a lamp to create a glow. I could never stop thinking about what would happen if a hot light bulb touched the cloth.