In my house, we're pinball fans. We're from Chicago, once the pinball manufacturing capital of the world, both of us grew up when pinball was in its glory days (and inexpensive), and we've had a few awesome pinball experiences, like the time we went camping in Smoky Mountain National Park during the gas shortage of the 1970's. After a few days of hiking and camping without access to showers, we decided to pay a visit to Gatlinburg to find a hotel room.

We were in luck. The gas shortage meant that many people weren't traveling, hotels were bargain basement cheap and...at the time, Gatlinburg, a tourist town, had tons of establishments with old pinball machines (and like the hotels, they were uber cheap). We had a good time. Of late, however, pinball machines are scarce. They've been replaced by other types of games.

But there are still some great places to play. Here's a map of the U.S. with a pinball roadtrip in mind (at the bottom, there is an interactive map). 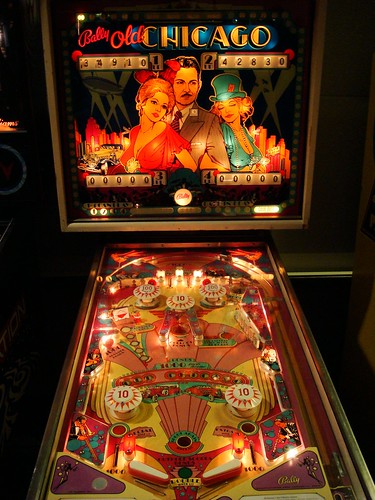 And here's a worldwide pinball map where pinball users keep track of the locations of various pinball machines.

But even if you're not a pinball fan, you might find this video interesting. Apparently, there was a time when pinball was illegal in New York.

If you're not into pinball, what types of games (or sports) do you like to play? Cards? Board games? Athletics? It's all good.