Angel Eyes is one of my bestselling books, and now I've finally released it as a paperback in addition to the ebook edition. 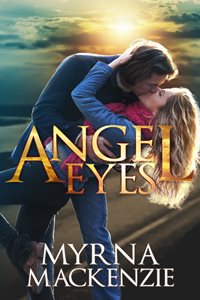 When Officer Luke Packard finds out that Sarah Tucker is coming to town, he isn’t fond of the idea. As a young girl, she had—supposedly—had visions, a talent for finding the missing, and Luke has good cause to be suspicious of such claims.

As for Sarah, Luke is the last man she could ever trust her heart to. He’s a widower with a young child, a man who needs to maintain a squeaky clean reputation, while she’s a woman who stirs up talk and controversy wherever she goes, a woman whose “gift” has only brought her and others pain. Her heart has already been broken too many times, and she’s trying desperately to mend her shattered family and retreat into the safety of anonymity and solitude. It can’t matter that Luke makes her want to take risks when the only logical thing to do is to keep her distance, to maintain her secrets.

But when danger comes looking for Sarah, logic no longer matters. She can’t hide from the truth she’s been running from, and Luke just can’t walk away…from his duty or from the woman who turns his world upside down whenever she’s near.