My garden is a little less than satisfying this year (a lot of ground cover by way of lily of the valley, some sparsely flowering larkspur, the foliage from a fair amount of columbine that bloomed earlier this year, but those are perennials or self seeding, so close enough). For the rest of my garden. I'm not sure if it's the weird weather we've had or just something I've done wrong, but my winter sowing (planting in milk jugs in winter) didn't go as well this year as it did the last two years. It was so warm when I first planted that the pumpkins started growing too soon and then died when  we had a bad cold snap. Plants that I had had luck with in the past (poppies, nasturtiums, dwarf cosmos) didn't sprout at all and I had to replant them again later. Still, I did have some successes...sort of.

The pumpkins eventually took off: 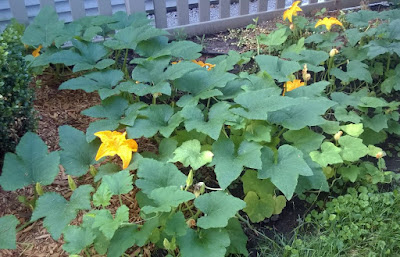 (The brick in the bottom image is to keep the plant from wandering off in the wrong direction).

And I'm even beginning to get a hint of female flowers to come. There are always lots of male flowers. They come first, and eventually--hopefully--a few female flowers and future pumpkins surface. I usually try to watch for them and pollinate them myself with a small paintbrush, just in case the bees aren't around (the flowers on a pumpkin are open for only a day or so, and if the window closes without pollination, you've lost your chance for a pumpkin). Here's a somewhat blurry shot of a future female. See the little round future pumpkin on the bottom? Below that is a male with no pumpkiny bottom (the ones in the photo above are all males). 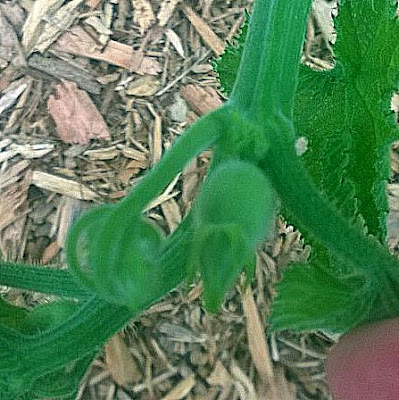 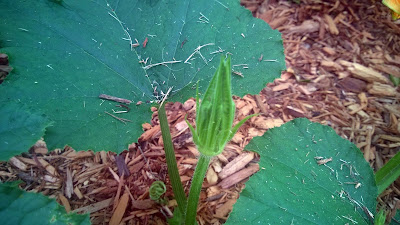 So, there's hope for the pumpkins.

The mandevillas came back after successfully overwintering (this is our second summer with them and last winter was their first winter, so I wasn't sure how well they would manage). That's them in the top of the image below (the dianthus on the bottom step and the flowers--mostly dianthus--in the whiskey barrel were store bought, so I can't claim credit for their good health). 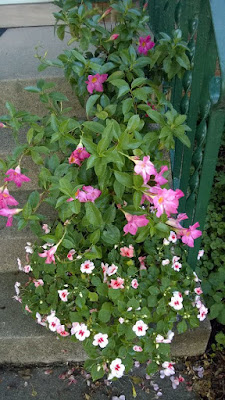 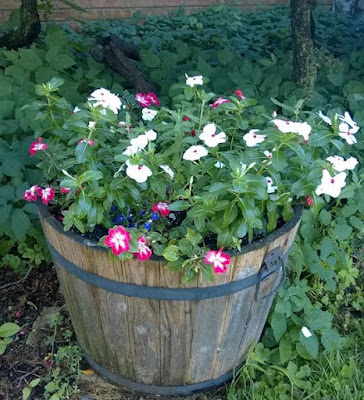 After a rocky start, my dwarf cosmos finally sprouted (I had to replant them several times from seed I gathered last year) and I have a small patch starting too bloom, along with a pathetically small bunch of zinnias and some asters that will eventually bloom (asters seem to grow like weeds. No problem there). 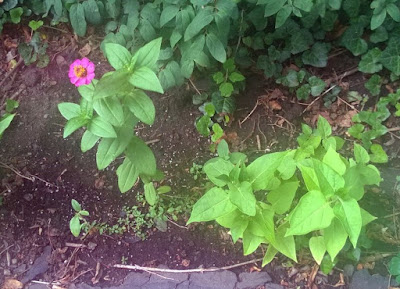 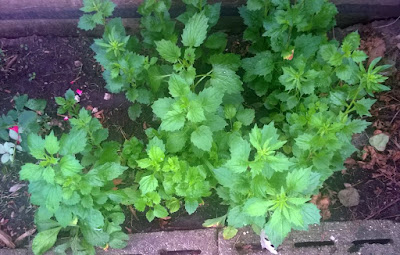 I also have 7 Early Girl and Bush Early Girl tomatoes which are doing all right (a little bottom rot on the first tomatoes, but that should clear up).

But I can't figure out what's wrong with my nasturtiums. Last year I planted them (winter sowed them, actually, although that shouldn't be necessary). They were one of the first plants to sprout, the very first plants to flower, and they continued flowering all summer. The photo below was taken June 5th of 2015. 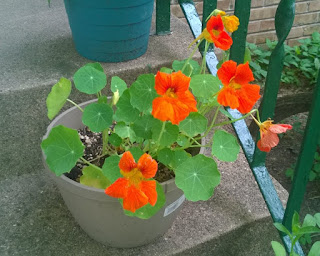 This year I planted seeds and they didn't come up. I planted them again, and they finally sprouted. But it's past the middle of July and while I have nice foliage, there isn't a single blossom on the plant (below). They're in the same location (two steps down from where they were in the photo above) and are receiving the same care. Nasturtiums are supposed to thrive on neglect, so I try not to over water them, but I have no idea what would cause them not to flower. Any thoughts? 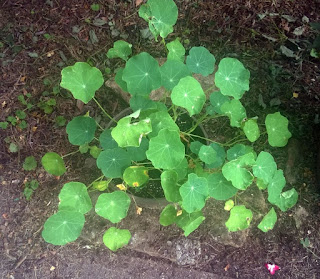 Oh well, maybe next year. I'll definitely try again. I don't eat the blossoms the way many people do (in salads?), but I like the orange blossoms.

Email ThisBlogThis!Share to TwitterShare to FacebookShare to Pinterest
Labels: gardening

Beautiful, Myrna. Thanks for sharing....

You're welcome! Thanks for visiting.