A Hot Drink for Winter?

I've been reading Rick Riordan's first book in The Kane Chronicles, The Red Pyramid (if you like his other books where the main characters are young people and the stories are contemporary adventures crossed with the world of Greek and Roman mythology, this one moves into the realm of...I guess I'd call it Egyptian mythology). So, while enjoying the book, I read a scene where Sadie, the young heroine is offered a cup of sahlab, a drink described as being similar to hot chocolate but more like hot vanilla. That did it. It's been cold here. I have to try this.

There are several videos online, but (at first, at least) I didn't find any that I liked. This image, however, kept me on the hunt for the perfect video and recipe: 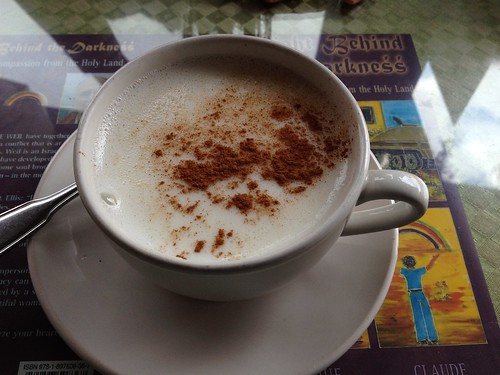 I found a number of different variations. Here's a link to a simple one (I loved the fact that so many people in the comments section noted that they had also read The Red Pyramid and gone on a search for the recipe). This one uses corn starch with vanilla for flavor and sugar to sweeten it. I've seen other flavors (rose water, for one) and some people prefer honey to sugar. A number of people have commented that they would prefer to omit the coconut topping (or pistachio, in other recipes), because they don't care for chewy things in a drink, so that's a possibility, too.

I did, eventually find a video that did the trick for me. It's a bit longer than I prefer, but I like the fact that she gives you options.

I haven't tried this yet (I think I'd like to try the orange blossom water, and I don't have any of that...yet).

So, what do you think? Does this look like something you would drink on a cold day? I confess that I'm biased because I'm associating it with a favorite book, but I also find the idea of a warm, creamy vanilla drink appealing.

Have a great (warm) day!

Doesn't appeal to MY palette, but hot cocoa certainly did a couple of nights ago. Yum! I figure whatever you find that works for you, go for it, as these days/nights get dreary with all the cold weather we're having! Take care....

Hot cocoa...yum! I had some with a hint of peppermint in it at Christmas that was pretty good. I hope you get a lull in the cold. Today we had a break and a bit of the snow melted, but tomorrow night it's back to brrr time.