I wonder how many people still belong to book clubs. I don't mean the kind where you get together with your friends and discuss books. I mean the kind where once a month or so the "club" sends you either a book or a pamphlet detailing their newest books (or, in this computer age, an email touting their newest offerings). There's usually a tempting initial offer (4 books for $1? or maybe today it's $5 or $10), followed by an obligation to buy x amount of books during a specific amount of time. Have you ever belonged to one of those? 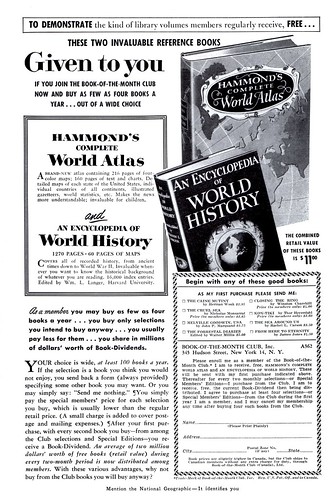 When I was young, I joined the Doubleday Book Club for a brief time, then later the Book of the Month Club (also briefly) and later still, another club which I belonged to for more years than I can recall, until yesterday when I dropped my membership. My reason for doing that (and the reason I'm not naming the club) is because it was taken over by another well known book club, and I didn't like their policies.

What I never liked about book clubs was the way they were run. They would either send you a book and you had to send it back if you didn't want it, or they would send you a notice that they were sending you a book, and you had a certain amount of time to tell them you didn't want it. After that, they sent the book automatically and charged you for it. (This was the reason I quit my book club. I had--years ago--fulfilled my introductory obligation and had requested that I move into a program where I simply perused their catalog and bought when I wanted to without any monthly reminders or obligations. Staying with the new company was going to throw me right back into that old program, or at least something similar, and I just couldn't see why I would want to do that again).

On the other hand, belonging to a book club enabled me to find books I might have never been exposed to otherwise. The books were carefully chosen, and that's how I found the author Fredrik Backman (I posted about a book by him a few weeks ago).

In its heyday, there were a number of book clubs, including specialty clubs for crafts, history and religion, and many of those book clubs still exist, although, as in many other areas, companies have consolidated until many of them (maybe even most) are owned by the same company.

Many of them have become irrelevant. With the advent of online shopping as well as ebooks, buying books has never been easier, and most of the online stores are less expensive than the book clubs can afford to be. Moreover, with the consolidation of clubs and employees, things don't always run as smoothly as one would like (I'll forgo my most recent complaint. Suffice it to say that errors were made and never corrected).

Still, I'm going to miss belonging to a book club and having those hand-picked choices delivered to my inbox. It feels like the end of an era.

I always bought from the Scholastic Book Club at my kids' schools. Didn't buy much, though, because not much was of interest, but I did my best to support the school in this way (and many other ways, of course).

I recently mailed in for the two free HQ books with a free gift, where it said to send back the invoice marked "cancelled". They said to allow 4-6 weeks for delivery of said books, so I mailed the card the day before leaving on a 5-week trip (it was supposed to be 4 weeks). When I got home, I found one box with the two books in it and the free butterfly bookmark, couriered ten days after I left, and the second box with my "subscription" of four books marked ten days later. I phoned HQ immediately. I had already opened the envelope taped to the front of each box (which apparently I wasn't supposed to do). If I had have left the envelope attached to the front, I could have written (according to the person on the phone) "cancelled" across the second box and returned it at no charge to myself. (That's not quite what they advertised in the beginning.) Because I had already opened the envelope but not the box, the woman was very nice to me and said it would cost too much for me to ship the books back to them (as IF), so I might as well keep them after all. So I got six books instead of the two that I expected (but my blood pressure went through the roof until that point). I had already read two of those books and am looking forward to some day reading the others (mostly by new authors to me), but I just don't have time until the end of August or so. I'm still catching up from our vacation (plus I have paid work to do too, of course)!

Never again. I should have known better....

My children brought home the brochures for the Scholastic Book Club too. Obviously universal. I always thought they were too expensive.

I have received free books & book stands from catalogue deals that came through the mail box. I read the fine print VERY CAREFULLY. It worked out very well. They were all for children's books. Mostly Dr. Suess.

Elaine, doesn't something like that happen every time a person goes out of town? When I got back last week, I discovered that my stopped mail kept arriving for several days after I left town (thank goodness I had a house watcher taking care of things). So glad that you got everything straightened out. Good luck catching up!

And yes, Scholastic Book Club is a good one. As a student and a teacher, I found it useful.

Mary, that's interesting. Years ago (I'm talking way back) Scholastic used to be affordable, and if students ordered a certain number of books, teachers could get free books for the classroom. In later years, though, when my sons were in school, the prices had gone up quite a bit.