Special Editions of Books for the Military

About a week ago, I was reading a newspaper article about a woman who was writing a book that dealt with the fact that during World War II, book publishers printed (and sold for mere pennies) special editions of the best of their books to entertain the soldiers. These were called Armed Services Editions and they were small in size and not meant to last.

Publishers feared what this might end up doing to their business, but what it might have done,  at least in some cases, was launch books that weren't doing so well. In the case of The Great Gatsby, for instance, only 25,000 copies of the book had been printed between 1925 and 1942, but 155,000 copies of the Armed Services Editions were printed. Soldiers read them, recommended them to friends and families, so maybe (?) that instigated the Fitzgerald revival in the 1940's. It certainly couldn't have hurt.

At any rate, there's a new book out (referenced in the article I read), titled When Books Went to War: The Stories That Helped Us Win World War II by Molly Guptill Manning that examines the topic further.

I was so fascinated that I went online and found a copy (the books were originally planned to last about 6 readings, but there are many still available at bookstores or other sites that carry used or vintage books). Here's my new old copy of Mrs. Parkington (purchased on Etsy). 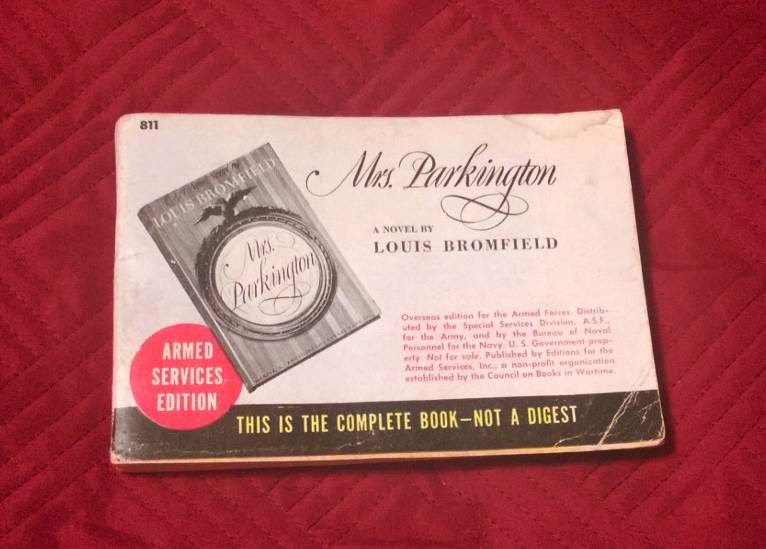 If you're interested in reading more, here's the article I spoke of  (from the Wall Street Journal) as well as another article from history.net..
Posted by Myrna Mackenzie at 7:00:00 PM

This is fascinating thank you. I doubt my father got his hands on any during WWII. Too busy traipsing through jungles I'd say. Different army too, though he did met up with a lot of American soldiers over the war years.

Mary, I never heard my father speak of this, either (he was in the South Pacific). I'm wondering if other armies did something similar. I haven't researched it yet, but now I'm interested in discovering all the ways armies try to aid their soldiers who are/were far from home and in truly unpleasant circumstances for long periods of time. I'm heartened by the fact that reading material was considered a great idea.