This is not actually news, since it was announced some months ago, but there's going to be a remake of the Poldark series. The original series (1975-) was based on the first seven books in Winston Graham's series. I've read all seven books (so many times that the cover fell off my copy of Ross Poldark, the first book in the series). But I have never read the other books. Fortunately, I was able to find copies and am looking forward to reading the rest of the books.

(Note: I haven't provided links to any of these, as, evidenced by the different styles shown here, there are numerous editions available).

Here's a trailer from the original series, one of my favorites:

There's also a book written by Robin Ellis, who played Ross Poldark about the making of the series as well as the details behind the never filmed third season and a bit about Robin Ellis's career after Poldark, including his current career as a cookbook author. For more about Robin Ellis, visit his website. (He's going to have a part in the new series). 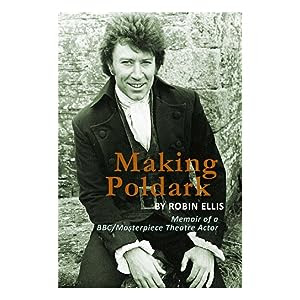 The new series will air in 2015 and will feature Aidan Turner as Ross Poldark. Here's a video (about the last Hobbit film) featuring Aidan Turner (as well as Richard Armitage and Dean O'Gorman, who alas, will not be in the new Poldark series. I adore Richard Armitage. If you haven't seen North and South, I highly recommend it).

I'm really looking forward to this new Poldark series. For now...back to reading the books.