A Book...and a Movie

Last week The Journal of Best Practices by David Finch showed up as a Kindle sale item in an email I received, so I gave it a try. It was a pleasant surprise. The book details what happens when David Finch, five years into his marriage, discovers that he has Asperger syndrome (an autism spectrum disorder) and that his behavior  is creating problems in his relationships. He at once decides to make changes in order to save his marriage, and the result is his journal of best practices and an interesting, informative, touching and often humorous book. (As of today's date, the ebook is still only $1.99 at both Amazon and Barnes and Noble, possibly elsewhere). 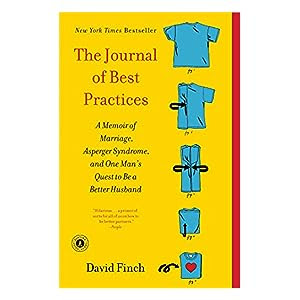 In a strange twist, I was glancing through my Amazon Prime Instant Video list and realized that somehow I had missed seeing the movie Temple Grandin (starring Claire Danes). If you, like me, haven't seen it, it's definitely worth a watch. Diagnosed autistic at age four, Temple Grandin is an incredibly interesting woman. She holds a PhD in animal science, she's an inventor interested in the humane treatment of animals who has designed animal handling devices and livestock handling facilities around the world. She is also a professor, a speaker in demand throughout the world and a bestselling author of numerous books, most notably on the topic of autism. In 2010 Time Magazine named her one of the 100 Most Influential People in the World.

Here's the trailer for the movie: