For years I've heard people say that if a person wants to lose weight, they (he/she) should keep a food diary, a daily record of everything that person eats. It made sense, but it always seemed as if it would be too much work. So, I never even considered keeping a diary of what I'd eaten each day until an offhand comment from one fellow writer to another fellow writer (not me) had me wondering why I've avoided doing this for so long.

Because once I got down to it, it's been very easy to do, practically second nature for me, and I'm attributing that to the fact that I've always been a list maker. My desk is riddled with To Do lists, lists of songs I want to remember, lists of possible future book titles, characters, story ideas, groceries I need to buy and pretty much anything that crosses my mind that I don't want to forget. The food diary, it turns out, is just a different type of list. I've been keeping one for the past several months, and I no longer even have to think about it much any more (if I'm away, I grab a piece of scratch paper and write down what I've eaten so that I can transcribe it later. Since I'm often a creature of habit, I set up a short list of foods I eat regularly and what their calorie count is so that I don't have to keep going online to find out that information, but by now I've memorized much of what I need to know just because there are some items that I eat on a regular basis.

And I'm not fussy about the process, either. Here's my current food diary. 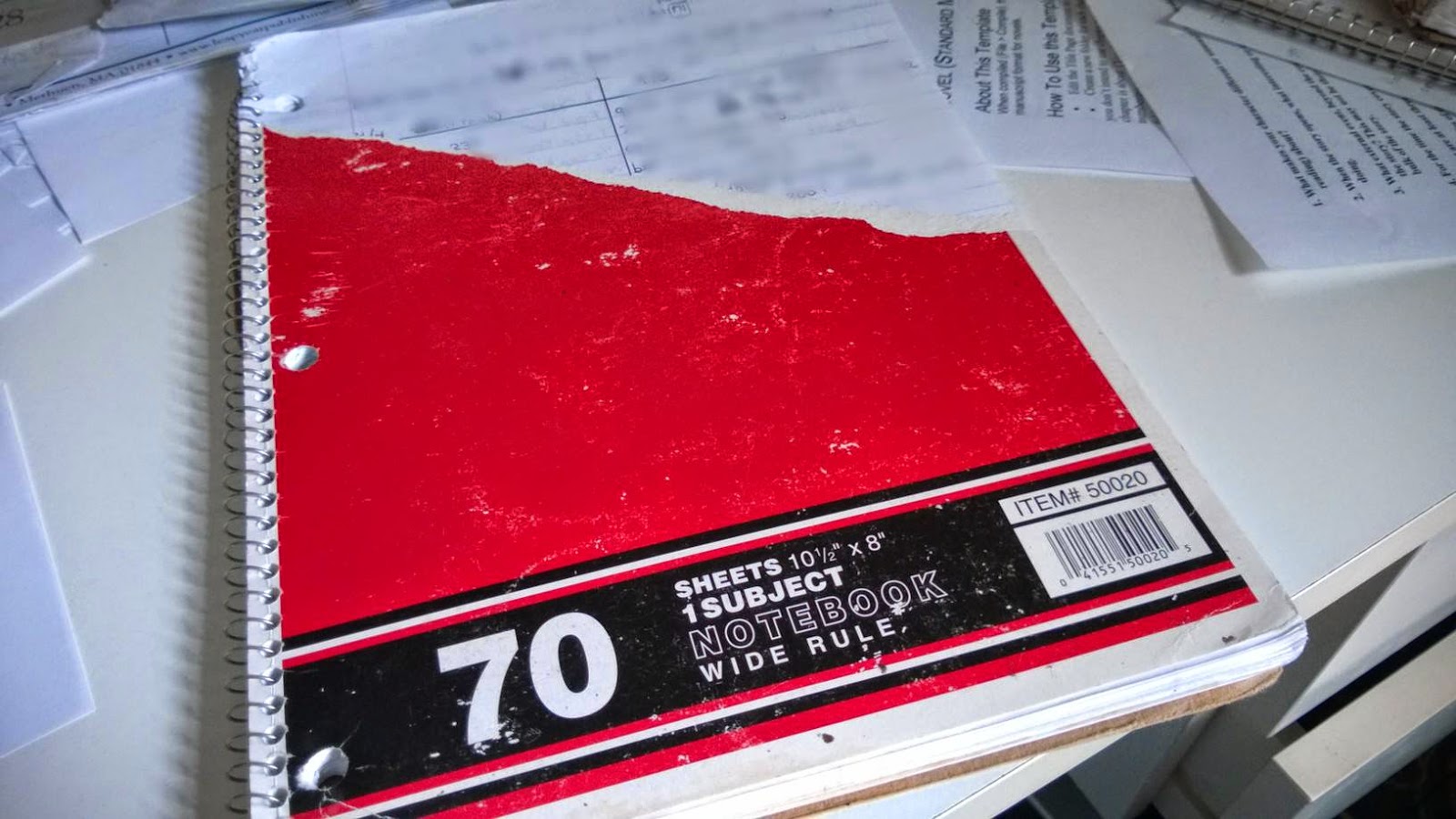 It's an old spiral notebook that one of my sons discarded after the school year was over. The front is even ripped, but...who cares? It does the task. As you can see, I create two columns on each page, so I can fit each day, just a penciled line running down the middle of the page. No big deal. It's fast. I just include the date with the day of the week, so I can easily refer back to it if I want to, my weight for the day and a running tally of what I've eaten and the amount of calories I've consumed. Sometimes, if I remember, I jot down whatever major exercise I've done at the top of the page, but most of the time I forget to do that.

I should have known that this would work for me. I've always been a hopeless list maker.

Are you a list maker? What types of lists do you make?

Lists. Don't get me going, Myrna. Oh yeah. You did. Poor you! Bet you're sorry you asked, LOL!
I write down how many cups of water I drink every day (usually between 7 and 13) - so that I don't go back to drinking 4-10 cans of Pepsi each day ... how many scrapbooking pages/albums I've done to date (to prod me on to doing more) ... which TV shows/movies I have watched (so I don't watch them over again) ... the usual grocery lists on the dry-erase board until I write them down on cardboard in my purse on grocery day (and erase once bought), so I will add those items to my grocery flyer lists on grocery day (and hopefully find them cheap enough to buy that week, as I won't buy them unless I'm getting a deal) ... all the non-fiction organizational books I've read from a dozen or so libraries (done on my computer in alphabetical order by author), again, so I don't re-read those books ... osteoarthritis areas that have "magically appeared" on various parts of my body (I'm going to run out of room on that list) ... previously kept track of peri-menopausal symptoms like when hot flashes appeared at 51 years of age ... number of times I am "bugged" by badminton people to DO things (so that I reinforce to myself to never be on the executive again - as I'm already too busy without that too) ... number of mending items done yearly (lowest was 27 and highest was 485 re holes in sock toes especially) ... number of books a year I've read (over 250 each year - especially romances - since 1973) ... and I'm sure I have at least a dozen more around here.
When my husband proposed, I wrote (and still have) a list of why I want to marry, why I don't want to marry, why I want to marry him, and why I don't want to marry him (and even though the lists were three times longer that I should NOT get married, I decided that the quality of the shorter lists outweighed the length of the longer lists) - and that was almost 33 years ago now.

Laney4, LOL, I thought I was a major list maker, but I'm passing my crown and scepter to you! You are the queen!

You make it sound like making lists is a good thing, but others might beg to differ. LOL. (My daughter already knows what papers to shred/burn when I'm gone, but I'm not willing to get rid of them yet. Perhaps when I downsize into "the home"!)