When we first moved into our home many years ago, there were about 4 rose bushes behind the house and also a climbing rose on the side. I am, as I've mentioned here before, at best an amateur gardener, and after a particularly cold winter, the roses in the back (despite being covered) developed black spot, and we removed them. 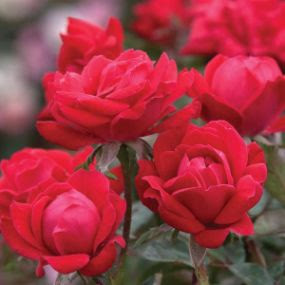 The climbing rose thrived and was a beautiful magenta with lots of blossoms, but eventually we added an addition to the house, which required the removal of the rose (once the addition was finished, we placed a crab apple tree in the area, which prevented replanting a rose there).

Since then we haven't had any roses at all. A silver maple we planted soon after moving here shades the yard a good part of the day, and I usually plant impatiens because they thrive in the shade, but having finally had luck finding enough sun to grow a few tomatoes in pots, we've decided to have a go at growing roses again. Between the time when we had to get rid of ours and the present, the Knockout Rose®, a very hardy, disease and insect resistant variety has come into play, so the time feels right.

Good luck, Myrna!
We don't have any annuals here. Too lazy, I guess. Perennials are much easier.
We used to have a flowering crab apple tree out front. Every year or two we had to keep lopping branches off, but it otherwise bloomed around May 5 every year, just for the day, returning to a dull colour once again. Then we made the momentous decision to cut the whole thing down in order to widen our single driveway into a double in front of the living room window so that both of our kids could park their "new" cars bumper to bumper (and we could still park our two cars in our carport leading to the garage). We still absolutely love our new wider driveway, but I especially miss my old tree at this time of year.

Laney4,sometimes you just have to make those tough decisions, don't you? (I hated losing that climbing rose, but we needed the extra room).