My First Car Shows Up...Sort Of

I'm not what you would call a car person. As long as it's functional, gets decent mileage and isn't too big, that's all I really care about for the most part. But when I bought my first car, I chose one based on its fun factor (first, being relative--my brother actually gave me my first car, a used '68 Pontiac LeMans--because he was buying a new car, he didn't feel he could get much for the old one, and just because he's a really nice guy and I needed a car. The car in this story is my first only in the sense that it's the first car I actually bought with my own money). 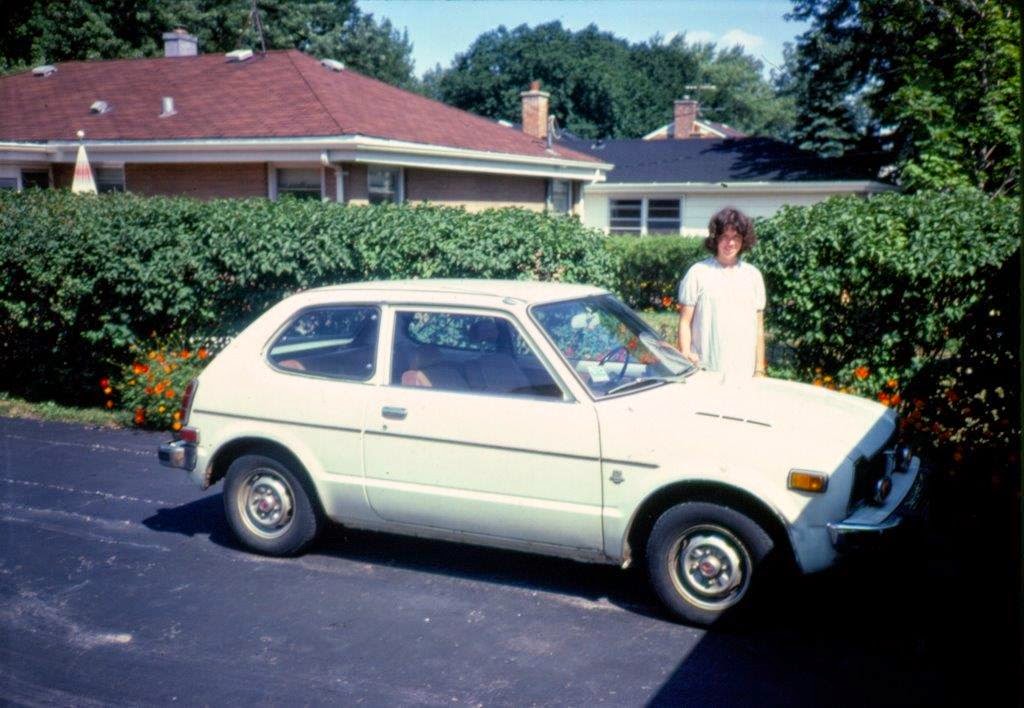 After the LeMans died a lengthy death, I borrowed a car from my mother for awhile, but eventually I bought a 4-year-old '77 Honda Civic back in the days when Hondas were not considered to be exceptionally desirable. They were tiny, they weren't very powerful, and this one had a tendency to rust. A lot.

But it was so much fun to drive, and I don't even like to drive all that much. I could fit it into any parking spot, I could push it out of the snow with just a little help if it got stuck, and I could easily wash it in a few minutes.

Alas, by the time this photo was taken 4 years after the Civic came to live outside my house, we had a baby on the way, and the back seat of the Civic was so tiny that you couldn't really fit a baby carrier, so it had to go. I've had several cars since then, but this one remains my favorite. I learned to drive stick shift just so I could buy it. In fact, I asked my brother-in-law to go with me to buy it, because I couldn't drive it home myself. He had to teach me the intricacies of using a stick shift and a clutch.

Some days I think about buying another tiny car, but there are so many behemoths on the road now that I'm afraid I might get squashed if someone in a huge SUV or truck fell asleep at the wheel. I'll probably just be happy that at one time I owned this little guy. And if you're wondering why I'm posting about this now (or what the title of this post means), I thought that I didn't have a single photo of the car, but last weekend we decided to cull a box of old slides and...voila! There it was. No longer just a memory but resurrected in photo form, scanned and now an image file on my computer.

So...what was your first (or favorite) car? Share your stories in the comments section (and if anyone wants to send me images of their cars, I'll include them in a separate post).

I have only recently learnt to drive - about 5 years now. I do not like driving, it's just to have another license in the house. I drive about once a year. I just use the family car. I walk everywhere. I can daydream & great exercise.

When I was 19, my mom forced me to buy a 1976 Maverick from a woman whose husband died, and she didn't drive. It was an ugly greenish yellow colour that looked even worse (which is difficult to believe) when it got rusty. I was not upset to drive it to the wreckers years later.
Since then, I've had a 1986 Pontiac 6000 (also driven to the wreckers), a 1997 Buick LeSabre (ditto), and a 2003 Buick Park Avenue (ditto, but because of a car accident). I currently own a 2004 Buick LeSabre. (I like the larger Buicks because they have something at the front and back in case of those possibilities of being "squashed" you noted, but these particular models have more leg room for me when I'm driving and when I'm a passenger; many people think SUVs and vans have more leg room, but for me they don't. There is also the issue of trying to get up INTO the vehicles, especially for my mother-in-law who requires a walker. Finally, I appreciate a good-sized trunk so that I can do all my weekly shopping in one fell swoop, including several cases of water and/or pop, which take up a lot of room - and I find this much easier on my back than trying to wrench groceries in and out of a van's back seat or minimal "trunk space".)

Mary, I've never enjoyed driving very much, either. I'm always too aware of how powerful and dangerous cars are. And I love walking!

Laney4, I totally understand about the Maverick. LOL I rather like the smaller SUVs (I had a little 4x4 Jeep Sport once, and I like being able to sit up higher, because at 5'4", I like anything that makes me feel taller), but even the small ones drink too much gas. And the bigger ones are just too mammoth for me. Right now I drive a Honda CR-V. It's an SUV but not a big one, and it's not that high because it's built on a car chassis. When this one dies (it's a 2003), I might get another one.