I was in the grocery store today in the produce section, the place where everything is happening. Seriously, there are always so many more people in the produce section than in any other part of the grocery store that we could have town hall meetings there (which might be fun). I've been known to say (truthfully) that I've thought myself out of troubling plot situations in a book while examining the cantaloupes or onions. 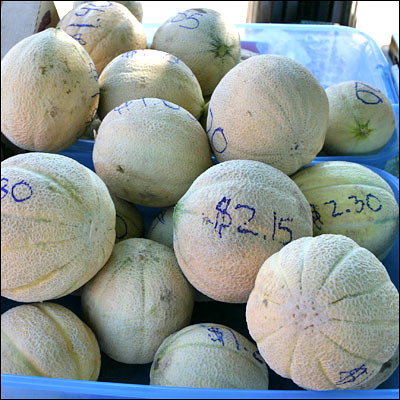 So maybe it's no surprise that I fear what might happen someday if I spend too much time daydreaming while choosing a melon. Today they were stacked so high that there seemed to be a serious danger of a cantaloupe avalanche if I picked up the wrong one. It was like one of those movies where the thieves have to strategically work their way between the lasers that will set off the alarm. Or an old comedy routine. And I, who have been known to do a few klutzy things while daydreaming, would be just the person to do it.

I'm totally aware of that, however, so when faced with a mountain of fruit, I proceed carefully and let my daydreams languish. Most of the time this stands me in good stead, and today was no different. I emerged from the store with my fruit and my dignity intact.

I'll save my story plotting for a day when the stack of cantaloupes is more manageable. However, true confession time: not long ago, I was buying an emergency can of frozen orange juice for those days when I run out of the fresh kind and don't have time to run to the store. I only needed one can, but...the display was one of those where things slide out and drop down, and it apparently decided that 4 or 5 would be better as they went spinning out of the frozen food case and onto the grocery store floor where two very nice ladies helped me pick them up and return them to their place. A person like me has to be very careful to always be on her guard when she's around anything stacked precariously.

I'm hoping that I'm not the only one.