I admit to having a weakness for young adult and children's books. Many of them are far more fascinating than some of the books written for adult (I suppose that's not a surprise to anyone. Harry Potter is known worldwide). One of my favorite writers is John Green (The Fault in Our Stars, Paper Towns) and right now I'm reading An Abundance of Katherines. His books usually feature characters who live slightly outside of society, brilliant or otherwise nerdy types or young people who are otherwise considered "other" by their fellow teens. I love getting to know his characters and watching them as they grow and become more self-aware. 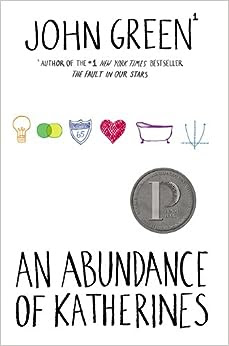 Here's the description on Amazon:

When it comes to relationships, Colin Singleton’s type is girls named Katherine. And when it comes to girls named Katherine, Colin is always getting dumped. Nineteen times, to be exact. On a road trip miles from home, this anagram-happy, washed-up child prodigy has ten thousand dollars in his pocket, a bloodthirsty feral hog on his trail, and an overweight, Judge Judy–loving best friend riding shotgun—but no Katherines. Colin is on a mission to prove The Theorem of Underlying Katherine Predictability, which he hopes will predict the future of any relationship, avenge Dumpees everywhere, and finally win him the girl. Love, friendship, and a dead Austro-Hungarian archduke add up to surprising and heart-changing conclusions in this ingeniously layered comic novel about reinventing oneself.

Any suggestions for what I should read next?

This sound lovely & quirky. Have you read any Bill Bryson books? They are non-fiction with a big dose of humour & asides.

Mary, I love Bill Bryson! A Walk in the Woods was the first thing I read by him, and I've reread it a couple of times, but I haven't read everything he's written, including his most recent one or two. Which ones would you recommend?