So, here in the U.S. Thanksgiving is less than a week away, and I'm thinking about what I'll be bringing to my sister's house. Usually, we attend 2 celebrations in one day (think insane whirlwind day), but this year just the one, so I felt that I ought to bring something other than my usual, pumpkin pie (no worries, I'm making the pie. It's a standard, it's expected and besides, I like pumpkin pie and I find it weird that we only eat it on this one day a year).

At any rate, I needed inspiration. My other standard dish that I bring for Christmas and other events is one that sounds boring (Vegetable Casserole), but in fact, is delicious and smells wonderful when it's cooking. It has Pepperidge Farm sage stuffing on the bottom, topped with layers of melted shredded swiss cheese and sauteed vegetables (onion, green pepper, zucchini, mushrooms and tomato flavored with thyme, salt and pepper). It's a fantastic dish, but everyone has had it a million (okay, several hundred thousand) times.

So...what to bring that would make me look awesome? (Yes, I do have an ulterior motive here). Then I remembered my favorite baker, Steph, the Sydney, Australia baker whose blog, raspberri cupcakes just won Cosmopolitan Australia's Fun Fearless Female award for Blogger of the Year. How awesome is that? I didn't even know she'd won that award until I went to her site in search of a great recipe, so that was a fun surprise. And, as always, I found what I wanted. Here's a picture of the Funfetti Skillet Cookie with White Chocolate Chips (with a link to the raspberri cupcake site's recipe, of course). I'll admit that part of the reason I want to make this is because I went on an unexpected kitchen cabinet cleaning expedition this week and unearthed a cast iron skillet that I had forgotten I owned. Another nice surprise. Now on to the baking part (I am not an accomplished baker, so this may be a challenge). Wish me luck. 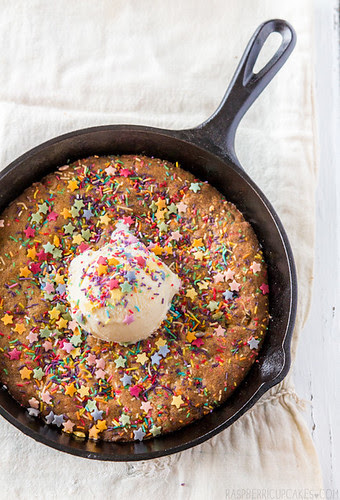 What are your favorite dishes to bring to gatherings? I would love to hear them.
Posted by Myrna Mackenzie at 7:23:00 AM

I take Moist Caramel Apple Cake (using Kraft's recipe, but adding a few more apples to make it healthier). I am awful at spreading nice-looking icing. This one you drizzle, so it doesn't look so bad, LOL, but it tastes incredible, probably because it has a cake mix, a pudding mix, and FOUR eggs included in its ingredients!!!
http://www.kraftrecipes.com/recipes/moist-caramel-apple-cake-75559.aspx
Usually I end up taking Caesar salad, no matter what time of year. It is easy to transport (as long as the lettuce in the Ziploc bag is NOT set against the ice in the cooler, but instead has a dish towel in-between), as you can assemble all the ingredients once supper is almost ready. I take the deep cake plate and cover so that I can toss all the lettuce in the lid easily (as the more extra space the better). I just toss in bacon bits (sometimes homemade, which people love), parmesan cheese, the romaine of course, and Caesar dressing (unless I feel extravagant and take some honey dressing I pay an arm and a leg for from friends who own a restaurant). I place chopped celery and chopped green peppers, as well as the croutons, in separate bowls beside the big bowl, as some people don't want these added to their salad.
If you'd prefer to take something else, mashed potatoes with shredded cheese and bacon bits is a big winner at Thanksgiving time. You can't go wrong with cheese AND bacon. I'm just sayin'....

I usually take a fruit platter. Most dos seem to be during the Summer time. The fruit here is amazing. Easy as, looks fantastic & appreciated after a meal.

Elaine and Mary, you two are making me hungry. I'm drooling over caramel cake and missing fruit as we roll into the winter (it was freezing here yesterday. I feel as if I need to hibernate)!

And Elaine, I agree. Cheese and bacon makes everything better! :-)