If you've been in the United States (and maybe other places) lately, you've heard of astronaut Chris Hadfield. He retired in July after an illustrious career, but he's written a book that is getting raves: An Astronaut's Guide to Life on Earth: What Going to Space Taught Me About Ingenuity, Determination and Being Prepared for Anything 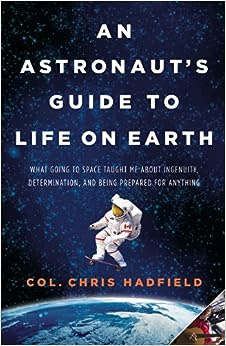 He has also given numerous interviews, including this one on Salon and this one on NPR. But what has caught the attention of even more people of late is the fact that when he was on the International Space Station during his last mission there earlier this year, he recorded a YouTube video of David Bowie's Space Oddity. At the moment it has more than 18 million views.

My daughter has just reserved this book at the library. So obviously this is ALL over the Internet.

And here I thought that his duet with Ed Robertson from Barenaked Ladies was more popular than Space Oddity, LOL!
I'm still a few months behind on my shows, but I know I have some of his interviews to watch later. He really brought attention to the space program when he used social media/the Internet so effectively, but I just like hearing him talk. He has so much to say that I probably should get his book too.

This just goes to show you how quickly information travels these days (and how I'm often behind times on things). I always think of myself as scientifically informed, but I didn't even know who Chris Hadfield was before I read an interview in the Sunday Chicago Tribune travel section. Now I see that he's everywhere. He has his own YouTube channel and is featured in many videos on the Canadian Space Agency's YouTube channel (doing fun stuff like showing us how astronauts sleep, brush their teeth and so forth). I ordered his book yesterday and am looking forward to it.