Remember how Jack was totally wowed by those beans and everyone thought he was crazy and naive? Sometimes writing is a bit like that. When I first started writing I tended to refrain from telling normal people (i.e., people who don't aspire to make a living dreaming things up and writing them down) that I was even interested in being a writer because I was sure that people would think I was naive and tilting at windmills. Also--big item here--I wasn't sure I could really succeed. But my dreams were like Jack's when he heard about those beans. He wanted to believe and so did I. 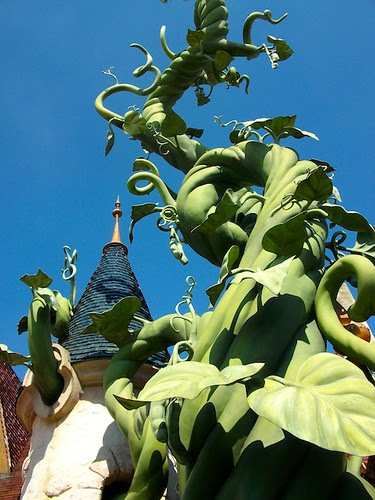 Dreaming, it turns out, naive as it my make a writer appear, is actually a great impetus to becoming a writer. If there's no leap of faith, you'll never do it, because let's face it, there are big, muscle-bound and scary giants trying to keep you from achieving your goal. Some of those are real. The marketplace can still be a bit like a carnival game, something that looks easy but isn't. Then there's all the information one needs to learn about "how to publish." There's also the huge amount of practice it takes to learn how to create something that other people actually want to read (and yes, I know that anyone can publish these days, but the number of people who write interesting stories isn't nearly as large as the number of people throwing their work out there).

Even worse are the roadblocks a writer can throw in her own path: fear, a stubborn refusal to edit her "baby" when it needs editing, ignorance of the marketplace (something that is easily curable but isn't always cured when writers try to take shortcuts) and fear (this one merits a second mention, maybe even a third or fourth because nothing else keeps an author from writing and publishing like fear).

So, like Jack, sometimes you just have to take a blind leap of faith. You have to believe. You have to keep going. You have to get rid of the obstacles and do the work that is required in order to make success a possibility. You might even (maybe) consider not telling 10,000 people that you want to be a writer, because like announcing that you're going on a diet, announcing your plans to write a book creates pressure. Lots of pressure, and writing already has more than enough built in pressure. Why shovel on more? (Unless, of course, you're the type of person who responds well to that kind of pressure. Then by all means, shovel away).

In the end, the most important thing to remember is that if you don't close your mind to doubt, take the beans, plant them and make the climb, you'll never get to the top. I guarantee that.
Posted by Myrna Mackenzie at 11:04:00 AM