The Wild Turkeys are Roaming

I was up in Wisconsin this weekend, and the trees still hadn't turned as much as I thought they would, but I still got a chance to see a bit of autumn color. 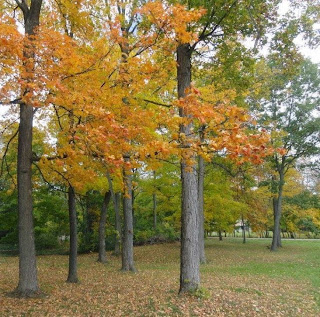 More interesting (to me, anyway) was the parade of wild turkeys wandering around. I don't know too much about turkeys, but I never seem to see them except during autumn. Obviously, they're around. They don't simply magically pop into place. I suspect the reason I see them is because this particular part of Wisconsin is highly populated (a bit farther away than this, of course), so there's no hunting allowed. I sometimes wonder if all the turkeys do the equivalent of getting on their cell phones and texting each other that it's time to, you know, head to the safer parts of the state, and that's why I get to see them only at this time of year. The rest of the year they're probably strutting around anywhere they please, knowing that they can't be touched. 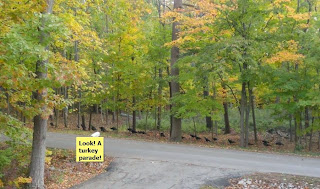 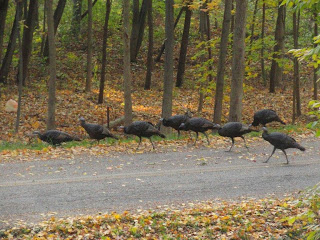 I also know that these large birds roost in trees, which is really incredible to watch. I don't have one of my own videos but here's one I found that will give you an idea of what it's like. They're pretty large creatures, and when they come out of the trees in the morning, it's so weird to see these huge birds sailing out of the trees and thudding down to the ground.
Posted by Myrna Mackenzie at 1:00:00 AM