Yesterday we had wild turkeys. Today here's a video of a rather large group (a raft? a team?) of ducks who decided to pay a visit to a CVS (for those of you who don't live near one, it's a pharmacy). Everyone, including the ducks, seems pretty calm as someone tries to gently encourage them to exit using a Swifter to herd them. I have no idea what eventually happened. Hopefully, they got back to their home safely.

I suppose we can attribute this to the ease of using automatic doors. I've seen plenty of hardware stores with birds flying around their high ceilings, I've seen video of the occasional deer that makes it into a store (that would be pretty frightening for both the animal and the shoppers, wouldn't it?), but I've never seen this many of any wild thing in a store. It reminds me so much of the children's book, MAKE WAY FOR DUCKLINGS (this book was first published in 1941 and it's still selling). 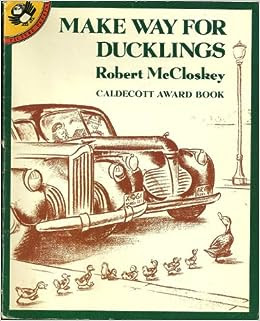 We have chickens at work, I work in Early Childhood, they wander through the rooms from time to time. The children think it's hilarious. I always chase them out because they have a tendency to get too excited & poop everywhere. The chickens, not the children, although....

My daughter is an Early Childhood Educator and I don't think she has experienced chickens wandering around her daycare centre. Will have to mention that to her. Chuckled at your last sentence, Mary. Glad you clarified, hehe.

Mary, that is too funny! (That's exactly what I was wondering about those ducks, too. I really wanted to title this post Cleanup in Aisle 3).

Elaine, I'll bet your daughter has experienced lots of interesting things. She and Mary have probably had many cute and funny moments. Little ones are so unpredictable and so full of energy. I usually taught 8 and 9-year olds, so the only time I worked with younger children (age 5) was when I was in training. I was amazed at the stamina of the long-time and not young teacher I was training under.