We were up in Wisconsin yesterday, and hovering around the flowers on the hostas was this little creature that flew just like a hummingbird but had double wings and antennae (which killed our "it's a hummingbird" theory). 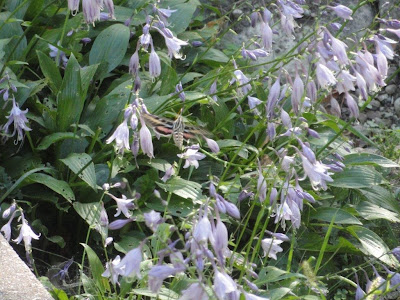 We didn't have video of it, but apparently it's commonly called a hummingbird clearwing. There's variation between the colors so it doesn't look exactly like the one in the video below, but close enough. Have you ever seen one of these? They're supposedly not uncommon but neither my husband or I had ever seen one.

One more quick look:
Posted by Myrna Mackenzie at 1:00:00 AM