Where I've Been - From Bicyclists to Pink Martini

I've been in and out for the past few days. Over the weekend (well, really Monday into Tuesday, not counting prep work), we hosted the Illini 4000, the group of University of Illinois students who bicycle from New York to San Francisco raising money for cancer research. This is our sixth year hosting them and it's always an honor and a lot of fun. They're interesting people doing something important and useful. This year there are 21 riders.

Then tonight, we headed to downtown Chicago's Millennium Park (beautiful place with great acoustics). We picnicked, drank a little wine and were treated to a concert by the wonderful group Pink Martini.

They're from Portland, Oregon, but they perform internationally and in various languages. Here's a preview of a song that will be on their upcoming album (it's fun, so I wanted to include it).

And a shot of Millennium Park's Cloud Gate (commonly called "the Bean").

And the band shell 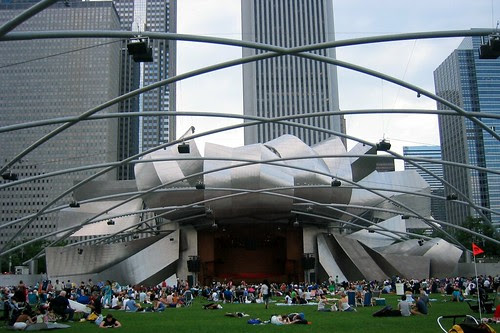