Continuing with the Puppy Theme...

Last year Mills and Boon released A Puppy for Christmas in the UK, but not in North America.

Now I see that it's going to be released in North America in October, albeit with a different cover. Fantastic! I was so worried that this book wouldn't be available here (well, the paper version is available on Amazon.UK now, but not the ebook version). When it gets closer to release time, I'll post more about it, but for now, I just wanted to post the cover and a link to the NA version. Hopefully, they'll get a more vibrant image up there when it's closer to release time. 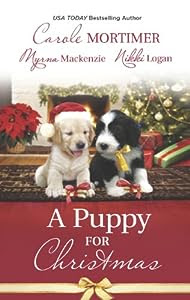 Soooo glad it's coming to North America. (It's about time!)
Read it. Loved it. Thought it was realistic. Could feel my heartbeat going faster at certain times. Liked how the townspeople were a part of the story. The blurb says, "... and ... puppy, Fizz, seem determined on spreading festive cheer"; I enjoyed that part of the story too. Yup. It's a winner!

I'm so glad you liked it! The release was so limited I wasn't sure that anyone I knew had even seen it. I had so much fun writing the puppy. Also, amazingly enough, this was my first Christmas book, something I'd been dying to do for a long time. Thank you!

Looking forward to this! Wanted to say I have enjoyed your daily posts, don't take time to reply.
Sherry

Sherry, thank you! And no worries on not replying. As a person who reads a number of blogs and rarely comments, I'm fine with that. Life is busy and there's never enough time!