Freeman, by Leonard Pitts Jr. (winner of the 2004 Pulitzer for Commentary) is a novel that takes place in America just after the Civil War ended and after President Lincoln was assassinated. It is at its heart a love story, the tale of a former slave separated from his wife for fifteen years who, now that slavery has been abolished, sets out on foot on a thousand-mile, seemingly impossible quest to try to find her. But it's also much more than that. It's the story of a horrendous time during our country's history, and it speaks to the issue of slavery and what happens in the aftermath of slavery being outlawed. What is it like to be a freed slave living among the angry people who formerly owned you and who bitterly resent the outcome of the war? How does a country move beyond something like that? How does a country heal itself? Those are just some of the questions this book presents. 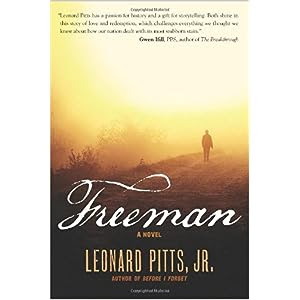 As you can probably guess, it was a book that was at times difficult to read. And  yet it was riveting. I read it very quickly.

I love novels based on history. Do you have any favorites?
Posted by Myrna Mackenzie at 1:00:00 AM

Nope, but I enjoy (non-fiction) autobiographies, especially when the authors recall stories based on times before or around the time I was born.

I'm a big fan of autobiographies myself. Or historical diaries. Years ago a reader, a sweet lady who, unfortunately, passed away, used to write me letters and tell me about her girlhood growing up in a rural area. Loved those. Those kinds of memories are priceless.