I've always wanted to bake bread, but...I'm a bit of a lazy cook. I know that kneading bread is supposed to be therapeutic, but I'm not on a search for therapy. I want bread. Still, when I bought Artisan Bread in Five Minutes a Day by Jeff Hertzberg, M.D. and Zoë François I was skeptical. Very skeptical, despite the many positive reviews on Amazon.

Well, no more skepticism here. I've only just started, but my first two loaves of bread came out perfect (and fast). There's no kneading involved, and while the 5 minutes doesn't include resting time and baking time, it's pretty much the actual time spent working with the dough (quickly stirring together water, yeast, salt and flour and then later shaping it into a loaf). Also, since this dough makes enough for 4 1-pound loaves and is refrigerated for up to 2 weeks, loaves 2, 3 and 4 are even faster since the mixing has already been done. 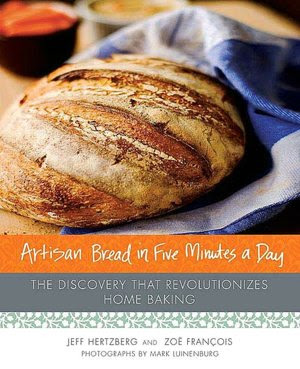 As an extra, I found a recipe which pretty much mimics this process, but makes only one loaf which is mixed in a ziplock bag (no mess). I haven't tried this yet, but it would save storage space and cleanup if a person only wanted a single loaf. Here's the recipe at Something Edible.

Every loaf of bread I have ever baked you could have used as a house brick. I would love to bake my own at times.

I can honestly say that all my attempts in the past turned out badly (gummy bread, half-baked on the inside but too hard on the outside). That's why I enjoyed this so much (well that and the fact that there's so little work involved).

Here's a link to an Instructables (with videos) based on this book: http://www.instructables.com/id/Artisan-Bread-in-Five-Minutes-a-Day/?ALLSTEPS The metric conversions are all there except for the oven temperature (450 F, which equals 230 C. Okay, really it's 232.222).

The book points out a couple of things that are important: make sure your oven temperature is right (I have one of those little oven thermometers you can buy anywhere and what I found with my oven was that I needed to wait a lot longer than I thought for my oven to reach the right temperature). Pouring the cup of hot water into the pan (that sits below your bread in the oven) is also important because this bread is actually steamed as it bakes. That's what gives it the distinct crusty crust with the soft inside. Lastly, I did weigh the dough (I found this cool and low-tech food scale), but when I made my second of the two loaves, I only had enough dough to make not quite a pound and the bread was still great. I think that if you don't have a scale, it would be better to go smaller rather than bigger. Less chance of the dough not getting done in the middle, I think. (I also forgot to slash the top of the bread the second time around. It was still fine, just not as opened up and pretty).

One last thing: I found it very helpful to read the comments below the Instructables if only to see that there were other people like me (not good at baking bread but who had found success with this). Happy baking, everyone!

I forgot that I can't actually post a link in the comments section, but you can still cut and paste it.