My Transit of Venus Experience

Yesterday was, as you know, the transit of Venus (when Venus passes directly between the earth and the sun and we see Venus as a small dot against the sun). The next time this happens again won't be until 2117, so my husband and I were eager to witness it. This took a bit of planning. We live in Illinois, which is mostly prairie (or former prairie), which means that it's mostly flat with the buildings and trees interfering with sky watching. So an hour or so before sunset we drove 30 minutes west to Blackwell Forest Preserve, the site of Mt. Hoy (a former landfill that is now covered with grass). From there we could see in all directions for miles around and we had a good view of the setting sun. There were a few other people there, and one couple, Tom and Judy, had a fantastic telescope. Tom had configured it so that the sun was safely in view (with filters) and Venus was quite visible. That's how my husband took this photo (yes, that little dot is Venus). 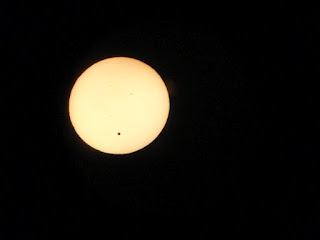 We all had a great time waiting for the magic moment (sunset at 8:25). Of the dozen or so of us up there (out of about a million people within a 30-minute drive), two of the men, total strangers, were named Tom, and two of the men shared the same birthday. Of the six people I was hanging around with, 3 groups of complete strangers, 4 of us were born in August (yes, we did have too much time on our hands while we waited). LOL I'm not sure if that means that August-borns are a bit nerdier than most, but it was fun to get to know a few strangers (near the end, we met a lady viewing the sun through a welder's mask). And I even picked up a few great travel tips while I was there. More on that another time. Here we are waiting for the big moment when the sun sets (I know it looks as if I'm yawning, but I'm really laughing). That's Tom of the fantastic telescope on the right. 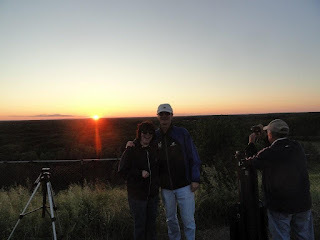 I'm still stunned by the "this won't happen again for 105 years bit.