In an Alternate Movie Universe

All of us, including actors, make choices, and sometimes it's fun to see what might have happened (but didn't) if an actor had made a different choice. Although people tend to wonder if the original actor didn't end up kicking him or herself when the movie they turned down ended up being a blockbuster...I'm not so sure. For one thing, we all find ways to rationalize our actions and most of us are pretty darn good at it, but also...who's to say that the movie would still have been such a success with a different actor at the helm? That's not to criticize any performers. I'm just saying that some roles click with certain actors, and changing the arrangement, even with the most accomplished actor in the world might change the dynamics enough to make a difference in the final product. Of course, all of this is pure speculation, so enough of my nonsense. Instead, set aside 5 or 10 minutes (or an afternoon) to gaze at this awesome image of Matt Damon. I adore Matt Damon. I want Matt Damon to be my state senator or my lunch buddy, to stand outside my grocery store passing out free hugs...or to just not complain that I'm writing like this about him and gazing at his picture. (If he ever read this blog. Which I'm sure he won't, so...hey, problem solved). 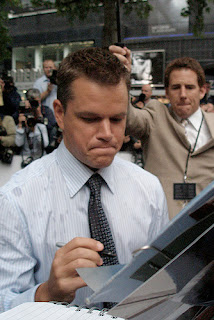 Image by claire_h
And then, when you've finished kissing your computer screen (or at least gazing at it for a very long time), go read If Movies Followed Their Original Casting to see who might have starred in what if the stars had (literally) been aligned differently. But I wouldn't dwell on any of this too much. The past is past, those movies are made, the actors have moved on to new projects, and there are are new movies coming out every week. What's on your "I want to see this movie" list?
via Misscellania
Posted by Myrna Mackenzie at 12:50:00 AM

It's hard to imagine anyone other than who actually took the role. They make it their own, totally.

I know. Once you've seen an actor in the part, they become that character, don't they? I think that's why I'm always nervous when they remake favorite movies.