It's That Time Again - I Have a New Book

It's August and I have a book coming out in both print and as an ebook. TO WED A RANCHER is the story of a former cowboy running from his past and a woman who knows exactly what she wants (and it isn't a cowboy or a husband, for that matter). 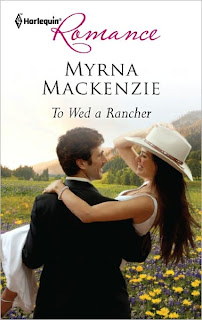 Here's the back cover copy:
Lost in Montana

When Rachel Everly dumps her cheating boyfriend, he dumps her in a one–horse Montana town with only her suitcase and beloved camera! Then a deep, whisky–rough voice, straight out of a cowboy movie, offers her a way out…
Rescued by the rancher
Shane Merritt plans to sell his parents' ranch, so he seizes the chance to hire Rachel as his photographer. At first, her enthusiasm for the dilapidated ranch bothers the taciturn cowboy, until he begins to see the woman who's putting the home back into his homestead in a whole new light!
And here's an excerpt:
"I'm sorry. It's obvious that I made a mistake. I was wrong to trust you. So, please, just go." Rachel Everly's voice wasn't as steady as she wanted it to be, but she managed to turn away from the car and the man she'd thought she'd known up until a few days ago.

"Rachel, stop acting stupid and hysterical. You're totally overreacting, so just get back in the car and let's go. Besides, I'm still your boss until this trip is over, and we have a photo shoot in Oregon in two days."

Oh, no, had Dennis really used the S word? And called her hysterical? And implied that trying to make another woman jealous by lying and saying he and Rachel were sleeping together was okay when he had claimed to have hired Rachel for her skill with a camera?

This morning, listening to him talking to the woman and then having him admit that his lies about Rachel had his ex-girlfriend wild to have him back, reality had hit Rachel hard. Dennis had been lying to her all along. He wasn't her friend. He wasn't fascinated by her skill as a photographer. He was a jerk who was just using her. And she had been used before.

Rachel wanted to whirl back toward the car and tell him what she thought, but right now she was almost as angry at herself as she was with him. Darn it, she had acted stupidly. She'd always prided herself on being nobody's fool, but the man had discovered her weakness. He'd used their shared interest in photography to make her feel unique, when she was clearly just a convenience who could serve both as an assistant and a lure to play another woman for a fool. Using photography, her greatest passion, against her was…not cool. But allowing herself to be used was even worse. She needed to get out of here with as much dignity as she could muster.

She pushed her shoulders back. "You'll have to find a new assistant for Oregon. You're not my boss anymore. I'm through with you." With that, she walked away.

Behind her, there was silence. Then Dennis let loose with a string of profanities, his tires squealing as he drove away. She closed her eyes.

"That's it, Everly! That's the last time I trust so blindly. Ever," she muttered out loud as the sound of the car died away. For long seconds she couldn't even think about what to do or where to go in this unfamiliar town. She simply stood in the middle of the street alone.

Or…not alone. The sound of something scuffling against the pavement made her breath catch in her throat. Immediately her senses went on high alert. She opened her eyes…and locked gazes with a tall, broad-shouldered man who, by the way he was looking at her, had clearly witnessed the whole exchange. Some sort of cowboy type judging by his boots, his jeans and his bronzed skin. He was standing just outside a store and must have been on the verge of entering or leaving when she and Dennis had begun their little scene. Her most personal failings had been viewed by this stranger.

She glared at him.

He didn't look even remotely fazed. "Do you need help?" he asked in a deep, whiskey-rough voice that sounded as if it came straight from some rugged cowboy movie.

Did she need help?

Yes, she thought, as a sense of failure tugged at her heart. Her past hadn't been the type that led her to build relationships. And, while this hadn't been a longstanding relationship, she'd thought she and Dennis had had something in common. She'd been wrong. Even worse, she'd been weak, and consequently blind.

Now, because of that uncharacteristic blindness, here she was. Alone. She was…she didn't even know where she was. Somewhere with a lot of cows and boots and cowboy stuff. In Montana. And talking to a stranger who had witnessed her humiliation. Still, she should be grateful for his offer, and a part of her was, but mostly she just wanted to escape those too-perceptive silver-blue eyes.

"Moraine. Do you need a lift somewhere?"

Oh, yeah, like she was going to get in a car with a stranger. She might have made a rookie mistake where Dennis was concerned, but she'd grown up around some big, bad cities. She'd taken her share of self-defense classes and knew how to behave when approached by unfamiliar men.

"No, thank you," she said primly. "I'm perfectly fine. I know exactly where I'm going and how to get there. I have friends." Which was, of course, a total lie.


The cowboy looked at her as if he knew that she was lying...and he knew a bunch of other stuff about her, too.


I love writing those cowboys and sassy heroines. Hope you enjoy!
Posted by Myrna Mackenzie at 1:00:00 AM

OMG, that DOES sound hot! What a great teaser! Thanks for sharing, Myrna!

CONGRATULATIONS!!!! You have a new book & out I am feeling less ill today. All is right with the world.

Thank you so much!

Mary, I'm so glad you're feeling a bit better. I hope you don't have anything serious. Sending good thoughts your way.