Did You Hear Something? What Was That Noise?

Friday night there was a huge boom in the middle of the night. A storm had hit with high winds, lots of lightning and booming thunder. I thought the boom had been the sound of lightning hitting a tree in the empty wooded area down the road, but in the morning, we awakened to find that a large branch from a rather tall tree had come down in the storm, bending a light pole as it fell. 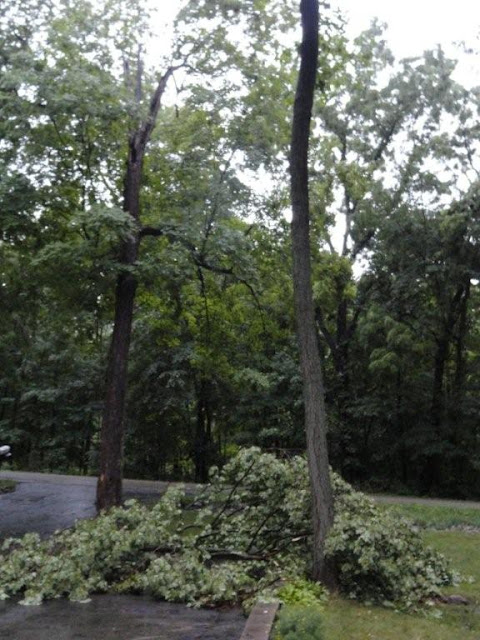 It doesn't look like much in this picture, but you wouldn't have wanted to be standing beneath it when it fell. 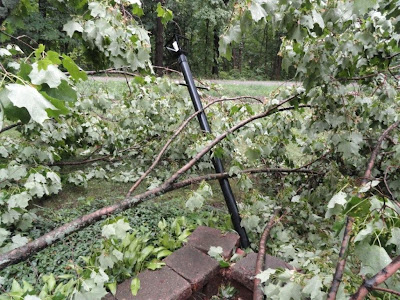 Uh oh, looks like more work to do. We managed to find all the pieces and put it back together, at least temporarily.

We spent a good part of the morning cutting up the branch (the power was out, so our electric saw was no good; hand tools were all we had to work with). The photo below shows what still remained in the driveway after we had cleared away the smaller branches with the limited tools we had. Then cleanup followed. It was hot, it started drizzling and sometimes raining as we worked. 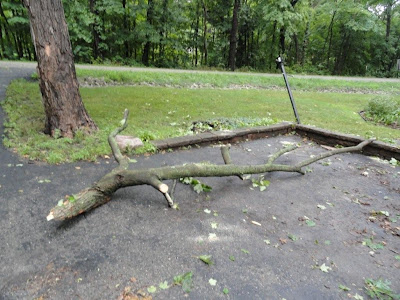 But as so often happens when unexpected bad things befall us, there was a small bit of silver lining. Wielding my saw was great exercise. By the end of the job, I felt as if I'd had a great workout, and it hadn't cost me a penny.

Maybe I need to cut up more trees. I could be in great shape in no time!
Posted by Myrna Mackenzie at 1:00:00 AM

Email ThisBlogThis!Share to TwitterShare to FacebookShare to Pinterest
Labels: exercise

That must have been some storm. I count doing housework as exercise, it's all good.

Heck! I consider going up and down the stair steps so many times daily as exercise! I think I'll stick to that rather than cutting down trees. Way to go for you, though, Myrna!

Yes! Any kind of manual labor or movement is exercise. I like that! (Makes it simple).