And They're On Their Way! - A Tale of 5 Incredible Journeys and of Some Amazing (and real) Heroes and Heroines

A few days ago some of us were discussing how amazing our children had turned out, so I hope you'll forgive me if I discuss something here that deals with that a bit. I have two sons. I'll call them The Engineer and The Photographer. They're in their twenties and both of them have given of their time to help others. The Photographer is in Missouri right now helping tornado victims with a group called All Hands. And as a part of a charity group called the Illini 4000 The Engineer has biked 4,000 miles across the country twice to raise money for cancer research and to help children whose families have been touched by cancer. Here's a photo of the 2008 group. 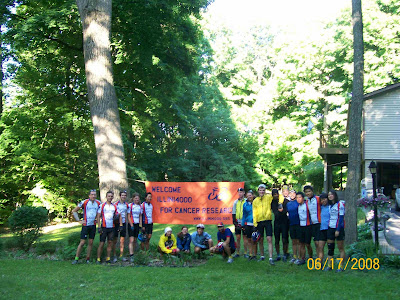 That effort is what I want to devote today's blog entry to. The Illini 4000 is an organization that started 5 years ago by a couple of amazing young men who decided to get a group of students together, ask them each to raise a couple of thousand dollars, bike across the country, visit hospitals, talk to cancer survivors and donate the money they had raised to the American Cancer Society and Camp Kesem. They succeeded in their goal, and since that time, every year in May a group of students begins the more than 2-month trek across the country. The group is called the Illini 4000 because most of them (not all) are students at the University of Illinois (the Illini) and because the first trips were 4,000 miles long (just under 6500 kilometers). Last year's group added an extra 500 miles to the trip as will this year's group. It's an amazing feat.
Even more amazing is that this devoted little group manages to donate almost 85% of their donations to the charities they serve. They're able to do this because they try to spend as little as possible (frankly, they eat a lot of peanut butter and jelly for lunch). Whenever possible, they ask churches, schools and families to give them shelter, and they seek donations of food along the way (and store owners, restaurants and church groups open their arms and hearts and donate, because...we've all been touched by cancer and people want to help. It's an admirable thing these young people are doing, pushing themselves to their physical limits in the hopes that they'll save lives and give hope to those who need it). I've met every group except the first and the last (this year's), and in a couple of weeks I'll meet this year's group, too, when they pass through our part of the country and stop to stay a night at our house.
It's an honor for my husband and I to be able to do this. And I'm glad that my son, The Engineer, is still involved (he did the ride twice, he was a director and ride leader one of those years, and now he's the alumni coordinator). It's good to see that the group has grown each year (this year there will be 29 riders). During the past 4 years, they have donated over $250,000 to the American Cancer Society and more than $25,000 to Camp Kesem, and this year they've already raised more than $117,000.
Yesterday they left New York on their long journey to San Francisco. They'll cross mountains, ride through rainstorms, visit cancer centers and meet with cancer survivors. Those survivors' stories will become part of The Portraits Project, a collection of narratives that tell the story of the experiences of those who live with cancer.
When the ride is over, their lives will be changed by this experience, and so will the lives of those of many of the people they meet along the way. This type of thing brings out the best in all of us. Hopefully, their efforts will someday help to bring about a cure for a disease that touches so many. I hope you'll join me in keeping them in your thoughts as they make their way across the country. (And if you live in the US and run into them on their journey, wish them well).
My apologies for being a bit long-winded today, but this group is near and dear to my heart.
And now that I've written far too much, I hope you'll tell me about your favorite charities. And feel free to brag about your children (it doesn't have to be about a charity. I'm happy that The Engineer sings in a choir. I'm thrilled that The Photographer just graduated from college and is starting his way in the great big world and that he's comfortable talking to people from many different backgrounds. I'm grateful that they both still continue to read for pleasure)! How about you? What is it about your children that you're grateful for (I've been known to say that I'm simply grateful that the two of them were born and inhabit the same world that I do).
Best Wishes to all of you,
Posted by Myrna Mackenzie at 1:00:00 AM

The Red Cross and Doctors Without Borders are the main charities that I support. They inspire me & make me want to be a better person too. My children are my joy.

Mary, I have a cousin whose husband has participated in Doctors Without Borders for years. What a wonderful organization that is!